Never before has a generation so diligently recorded themselves accomplishing so little. Anon.

I wish that selfies translated as self love. I wish people put as much emphasis on making sure their insides looked good as much as the outside. Below are two photos of two good looking females, taking a selfie, as we all do. The question is what’s wrong with these pictures? 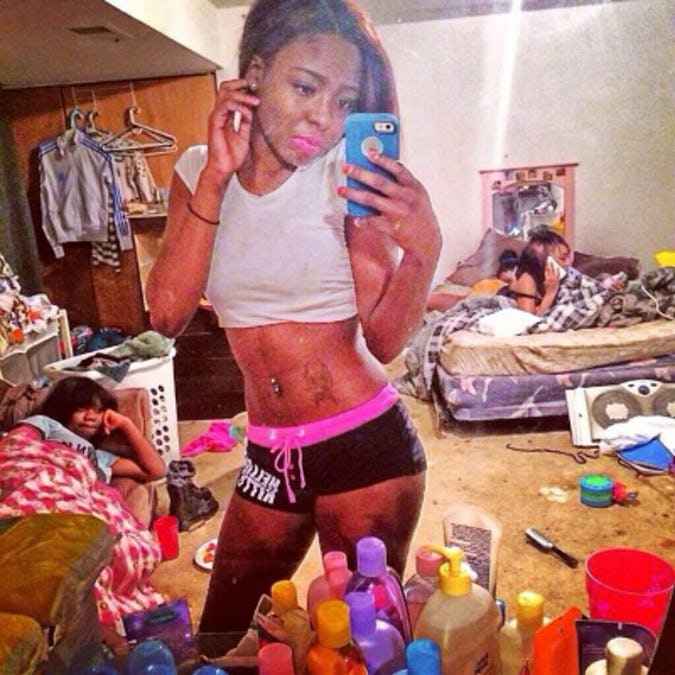 Yes, you’ve guessed it!  It’s the dirty room. Looking good in a photo seems to be more important than your living quarters these days. There could be a reasonable explanation like it’s not their house, it’s a one-off messy day or this is just normal living for them and they don’t see anything wrong with it. I just find it surprising that certain women always have money for hair and nails to be done or have time to do squats but have no time to clean their house. For all the males out there I wonder if you would have even noticed the house first? If not then these are called thirst trap photos which only attract thirsty guys.

There was another picture of a woman that I saw who took a selfie in bathroom, hair did, make-up on fleek, scantily clad and booty twisted to the front to be seen. That same women’s baby father posted a video of her house on social media. As he went from room to room what was revealed was shocking!  There were clothes and garbage all over the floor, the bed wasn’t made, the woman’s socks were black from probably walking on her own carpet, there was a child in the room next door lying on the floor next to garbage, not very well dressed at all.  Of course, social media was dragging the woman for how nasty her house was and I agree she should have been dragged, but why does the baby father get a pass? Instead of walking around filming that he should have got his child outta there! Now I don’t know if he was filming for the purpose of gaining custody of the child or to shame the mother, either way it ended up on social media so I’m guessing it was the latter.

I just think it’s crazy that all people care about is looking good for social media and taking care of your responsibilities comes secondary to getting a few likes. I get why people do it though, the reality is, more people flock to negativity than positivity and I don’t know why that is.  More people are tuned into gossip blogs, reality tv shows that have a lot of drama, and music that spews all kinds of derogatory words. Even though the news constantly gives bad news people still watch it. I guess people want to see someone out there is doing worse than they are and this might make them feel better, I dunno that’s just my theory.

So let me know what your thought are on this dirty trend situation below.  I would especially like to hear a male point of view on this. Would you date this type of woman? Does this type of thing even bother you or do you only care about the way she looks? Females let me know if you are always cautious of what is in your background before you take a picture.