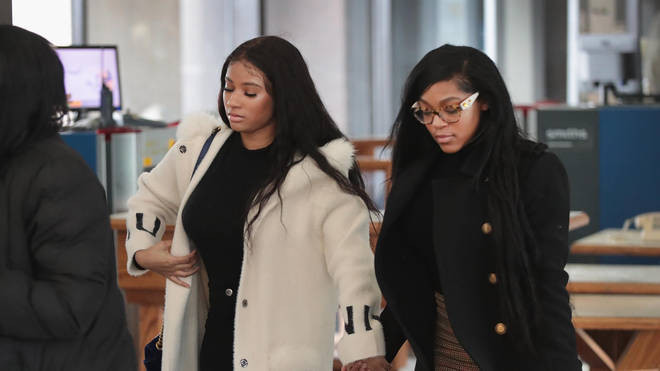 So the witch hunters are out for R Kelly’s blood. Do I think R Kelly is innocent? No! but I don’t think he is guilty of all the accusations he is in the media for at the moment. The man like many of us has made some bad decisions when it comes to the relationships and I really feel sorry for him for the fact that he has not had any decent people around him to begin with. If he is guilty of sleeping with underaged girls the people around him are just as devilish because they allowed it to happen, if he didn’t do these heinous crimes he has a legion of Judas’s in his midst, because they are willing to turn their back on him at the drop of a hat.

However the focus of my post today is not whether he is innocent or guilty but the fact that I believe the media have an agenda and they have been pushing this from the beginning of this fiasco. At this moment in time R Kelly is in a relationship with two young women. Its so funny how the rumours for months have been “R Kelly has 50 women locked up in his basement”, “He doesnt let them out for food”, “They have to ask permission to go to the toilet” and everyone believed this. However when the two current girlfriends of R Kelly are stating on national TV that they are ok, that they love R Kelly, that their parents are lying for money the world says they’re “brainwashed“. Its just riduculous to me. Have you never heard of the phrase “Hell hath no fury like a woman scorned?” Again I’d like to point out that I’m not giving R Kelly a pass, clearly he has pissed off a lot of women but that could be just due to the fact that he loves women…and most men do, he’s not doing anything different to what the average man does. It’s so obvious the media has an agenda to bring this man down. Call the women stupid if you want but it is clear that they are not brainwashed and they are quite coherent. Whether they will grow to regret their decision years later is yet to be determined, the gag is…I’m sure we can all recall a time when we have been a fool in love. We all have a war scar or two from the people we thought loved us. The more that I look into this situationship as it unfolds in the media, I’m leaning towards the opinion that most of the women speaking out against R Kelly were in love with or infatuated with him at some point and it just didn’t work out, call them fools in love. At the moment the two women who love him are staying by his side, they may live to regret it, they may not. We have no right to judge who they want to be in a relationship with, in the same way, nobody could tell you anything when you were with someone your family or friends didn’t approve of.

Bottom line is, they interviewed R Kelly at his home and didn’t find a sex dungeon or 50 hostages. The women that were apparently held against their will say that they are ok. I thought the interview R Kelly had with Gayle on CBS was very bias, Gayle was not neutral neither were the women that accompanied her on the commentary of the interview. Its like they have already made up in their mind that he is guilty and a lot of people are saying that he is. Remember, Michael Jackson was accused of the same thing and he was found not guilty and I’m not being funny but I’m sure they would have loved to have thrown him in jail but there was no evidence. Bill Cosby was not accused of paedophilia but he was thrown in jail due to him admitting his crime. R Kelly was put on trial and was found not guilty because the alleged girl in the video tape said it wasn’t her. Now if it really was her that was in the video and she denied it, why does the world care? She clearly doesn’t. Now its like they want to throw him in jail on anything they can. He was recently put in jail for child support back payments of 161k sorry but why weren’t they hunting him down during the first thousand dollars? So the man is guilty of not taking care of his responsibilities, that is not a new story in the black community. Anyway this post is going on too long, let me know your thoughts below.