Indeed God speaks once, twice, yet no one notices it. In a dream, a vision of the night, when sound sleep falls on men, while they slumber in their beds, he opens the ears of men, and seals their instruction…Job 33v16.

Who says that God doesn’t speak? The quote above confirms he is constantly giving instruction but are you listening? Do you pay attention to your dreams or do you dismiss it as just a dream? I’m a firm believer that your dreams are a preview of your future, it is the spiritual compass that gives direction and answers to everyday issues. My mother has the gift of dreams to the point where it is prophetic, she will dream something exactly as it happens and then it comes true, she is very accurate. I feel that she has passed that gift onto me too although mine are not as accurate the general outline is still there. I dreamt I would be moving to Dubai even before I moved here. I didn’t know it was Dubai, but the things I saw in the dream were exactly what I saw here when I got here. Dreams are a confirmation that you are where you are suppose to be. I believe deja vu to be dreams that you can’t remember and it feels that you’ve met someone, done something or been somewhere before because you have…you’ve travelled there in your dream.

The bible has recorded many men who have had encounters with God through dreams. Joseph was a dreamer and interpreter. He had two dreams about being a ruler not just over his family but over the whole of Egypt. It didn’t happen straight away, in fact the complete opposite happened, he was sold into slavery by his own family and he was thrown in prison. At this point he could have just dismissed his dream as just a dream but when his brothers came to ask him for forgiveness of what they did to him he had enough wisdom to know that even though they meant it for evil, God’s divine plan was for the good of his whole family. The moral of the story is don’t dismiss your dreams, even if you think they are nonsense (keep a dream journal by your bed and start recording your dreams, it will help you to remember them better) and don’t despise those who make your life hell because often times they are propelling you into your destiny.

God came to Abimelech in a dream to warn him that Sarah was Abrahams wife and that he shouldn’t touch her. Jacob had a dream of angels ascending and descending to and from earth. King Solomon was visited by God in a dream and he was given wisdom as well as riches because he asked for wisdom to rule his people effectively. Your dreams are the answers to the questions you have in waking life, they may be symbolic, prophetic, recurring or even nightmares. Usually when you keep having the same dream its because theres an issue in waking life that you are not dealing with, they can also be warnings, pay attention and deal with the issue and the recurring dream or nightmare will stop.

Being of caribbean descent dreams are very important in our culture and certain symbolic dreams have meanings such as; dreaming of fish means someone is pregnant, faeces means money, standing in clean water is a good dream, murky water the opposite, if you dream you’re crying in a dream you’ll be happy and vice versa, teeth falling out means sickness or death. I believe that your dreams have the meaning that you give it, for example if you have a dream of a spider, for someone who is scared of spiders might see that as a bad dream, but someone who understands the spider will see that the spider is efficient enough create elaborate webs made of silk, and even when its web is destroyed it goes off and makes another one it could be symbolic of perseverance. Colours in dreams can have duel meanings; the colour red could mean passion or anger, blue can mean sadness or serenity, green can mean envy or prosperity! Bottom line is, it’s for you to interpret because nobody knows you, better than you.

The purpose of this post is to encourage you to dream. Pay attention to your dreams. Practice remembering your dreams if you believe that you don’t dream. Everybody dreams! Some of the most influential people on this earth were lead by dreams. Paul McCartney had a dream about the famous song ‘Yesterday’, which is now one of the most covered songs in history.  James Cameron the director of the film Terminator, had a dream of a future lead by robots. The same shiny robots that we see in the film Terminator was the catalyst to what may be deemed as a classic film. Albert Einstein discovered the formula E=mc2 through a dream too. So dreams have the ability to change the world, you never know, your dream may enable you to be the next person that changes history…Stay true to your dreams. 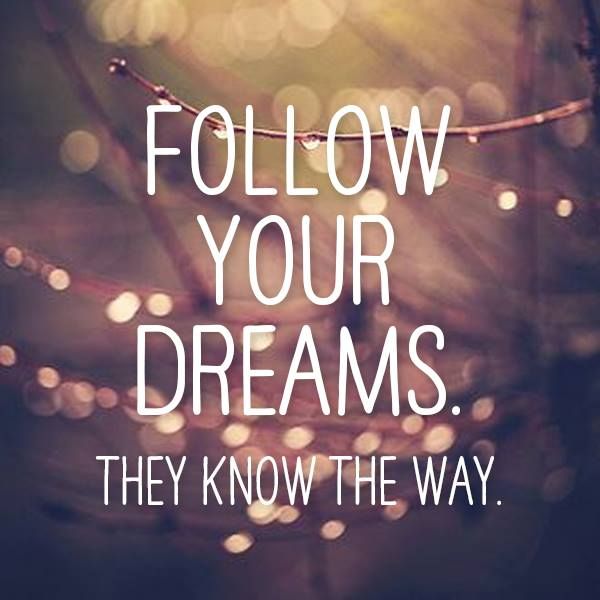