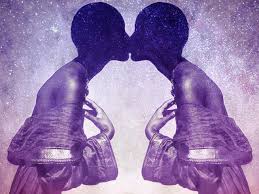 Every person in your life shows you something about yourself, they are a reflection of you. Ever heard people say if you want to know what type of person he/she is just look at their friends? Well that statement couldn’t be more true, the purpose of the people you meet in life is to show you, yourself. You may be thinking, I have some friends and they are nothing like me at all! An example of this would be…you may have a friend who just loves to be the centre of attention and you don’t like that about your friend, but really that trait maybe something you have repressed within yourself, its the resisting of that trait that makes you attract people like that into your life. Let me explain.

Pay attention to your fears or your negative traits that you resist in your mind because by the act of trying to ignore a fear you are still subconsciously focussing on it and as a result you will still attract that into your life, don’t resist the fear but simply acknowledge it and it will diminish. In male/female relationships, the person you choose to be with is your mirror. Yes even the negative energies that you don’t like about them could be a reflection of yourself that you have kept hidden (resisted). I’m only saying this about the people you choose to keep around you even though they may annoy you, obviously if you don’t want to be around people that you cant’t stand you can walk away, as long as you’ve learnt something from the experience. What I’m highlighting applies to the traits you can’t stand but you still want that person around for some strange reason or maybe you’re stuck in a pattern of dating the same kind of person with a different face. Have you ever noticed that say for example someone didn’t like dogs…someway, somehow a dog always finds its way to them. Its always the men you ignore that are all over you, whenever you’re all goo goo gaga over a toddler they don’t want to know you and the minute you ignore them they come to you, ever think why that is?  If you think about a magnet the north pole attracts the south pole of another magnet but both north poles repel each other.

The Yin Yang philosophy of the Chinese describe how opposing forces actually complement each other. They provide balance and are not completely one way or another but have both yin yang aspects. As humans females have a masculine side and males have a feminine side but its usually not as prominent in the opposing sex. Many women today can say they don’t need a man to take care of them, which may be true since we are making just as much or even more money than men, but we would cease to exist if we didn’t have each other, we create generations, we need each other for our survival. You can’t have one without the other, one exists simply because the other does to create a perfect balance of, good and evil, light and dark, hot and cold etc.

The traditional idea of soul mates is someone who completes you because you were a half before you became whole. They are the person who has been matched with you spiritually before you was even born and when you finally find that someone you can’t imagine life without them. They’re the person you can have comfortable silences with, who finishes your sentences, you know what they’re feeling even before they’ve told you, sort of like twins! (In fact the discourse of soul mates have now transferred to twin flames which is slightly different but maybe I’ll save that for another post). You just feel like you’ve known them all your life. I would like to propose that soul mates are the people that are here to expand you as a person and your experience on earth, to help you stretch and grow. You can have more than one soul mate and a soul mate could even be your worst enemy…gasp! It’s the negative experiences in life can either paralyse us or propel us to learn. The true purpose of a soul mate is to help you to become a better version of yourself and sometimes that doesn’t come as the path of least resistance, the more resistance the better. If you go to the gym you will find that if the bar bell doesn’t give resistance you won’t gain any muscles. I’m not saying that the relationship you’re in has to be a living hell or full of negativity, but it should challenge you. Some of you may not even believe in soul mates but for those of you who think there is that one person out there for you, the good news is, if its a desire it will happen, because thoughts become things.